To set the record straight, no we don’t have a thing for rain.

Several of my friends who lived here last year told me about this heat wave in London last year in August and about the general lack of air condition in the city that makes things miserable. When I started working and commented on our freezing cold a/c (in April!) coworkers told me I would be happy come August, when it’s HOT. So, with that in mind, I figured we’d be eager to escape the heat and want to head north into Scandinavia. So several months ago I booked us tickets to Bergen, a city that averages over 260 days of rain per year! 3 days in the crisp Norwegian Fjords, oh how clever I thought I was.

But then we get the 2007 floods and the worst summer on record (since the 1700’s apparently) and I feel a bit silly flying north for the last bank holiday of the year.

But with e-tickets burning a hole in our inbox, it’s off to the fjords for us.

As the plane makes it’s pass over Bergen, first impressions are excellent: dark green landscape of small islands dotted with brightly coloured houses. After a slight delay with EuropeCar, we loaded into our green Ford and headed North.

Driving in western Norway is probably as close to driving in a car commercial as you can get. Tight narrow roads wind through the forested hills meanwhile breathtaking scenery drops down into the valleys below you. Once you get about 2 hours outside of Bergen the traffic dies down nicely giving you that “closed course” feel (Except when you round those blind corners and find yourself head on with a tour bus). 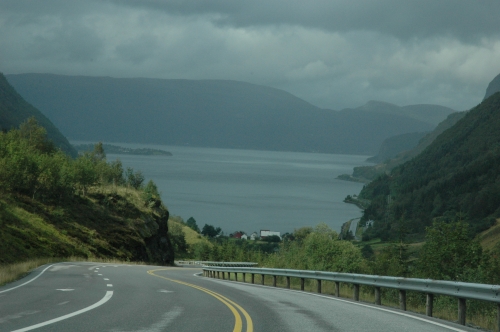 To get through the impossible landscape, the Norwegians have cut hundreds of tunnels into the fjords, some as long as 24km, many of which cut directly through the fjord. But with the landscaped so geographically shredded the infrastructure is further supplemented with high class car ferries.

We made our home base for the weekend in Mundal, a tiny village in the Sognefjord, Europes largest Fjord. 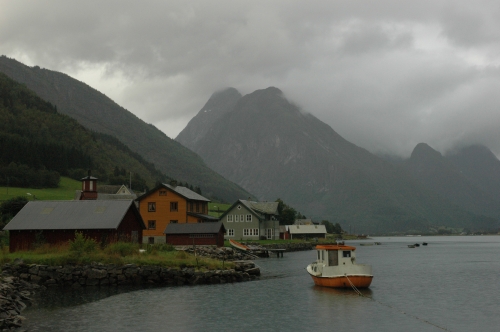 This village may only have 2 hotels and 1 cafe, but it still manages to have 14 bookshops and the self declared title: Norway’s Book Town. 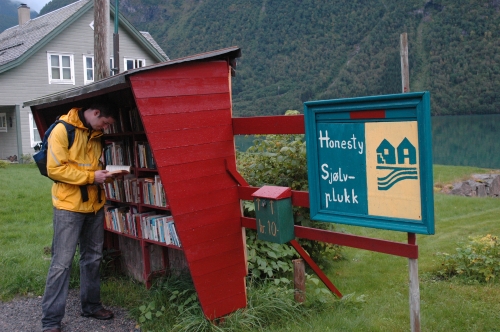 I’ll be honest, those who know me well, know that the idea of paper books sitting out in the damp outdoors does not sit well with me. But that’s another story.

Sunday brings us across another car ferry to Ornes to check out the Norway’s oldest stave church: 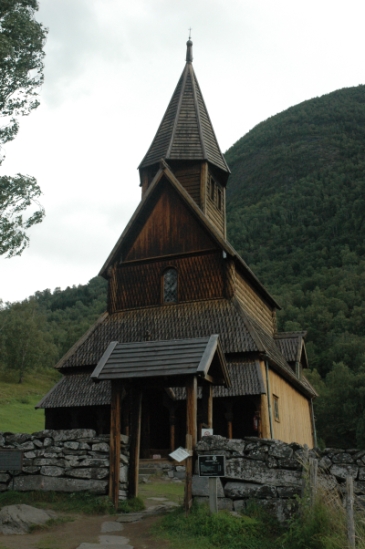 .. and later that day to Jostedalen Glacier, the largest glacier in continental Europe. Both stops involved a bit of a hike, clearly the glacier more so: 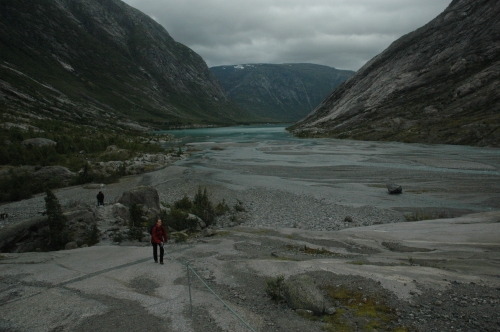 The fjords are a place where photos just can’t do it justice. The scenery is truly magnificent.
After several weeks in Iceland in 2003, we are no stranger to glaciers. But with this one we managed to get a more dramatic view of the glaciers edge. In Iceland, the end of the glacier more subtly melted into the rock, where as here it appeared to be cleanly sliced revealing the layers of blue and white on the interior. 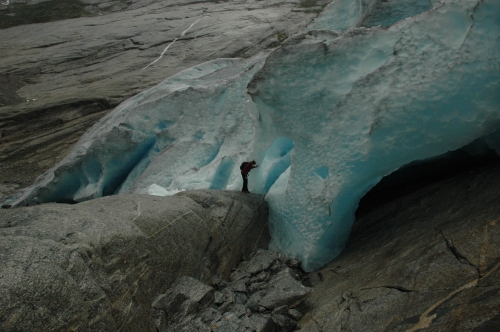 That evening we drove back to Mundal snacking on Wasa rye crispbreads topped with local Yarlsberg cheese and thin slices of dried salted lamb. Norwegian food is in fact quite delicious. The meatballs with cloudberry sauce we had for dinner the night before were excellent as was our lunch of Smorbord, open faced sandwiches common to Scandinavia that we first sampled in Copenhagen in 2005. And as we learned earlier that day, local raspberries taste uncannily like gummy Swedish Berries. Thankfully unlike Iceland, Norway is not a culinary dead spot.

Monday we decide to take a long scenic route back to Bergen starting with an hour and a half long car ferry across the fjord to the small port village of Vangsnes. Cruising the fjords gives you perspective as to just how massive the surrounding hills are. Ribbons of glacier waterfalls trickle down the slopes of the hills; it’s a peaceful way to travel.

As we make our way back to Bergen, our little green Ford makes the shockingly steep climb out of the Sognefjord away from Vangsnes and remarkably over into the next fjord just south of us.
It’s at the top though that we experience the most memorable scenery of the trip. 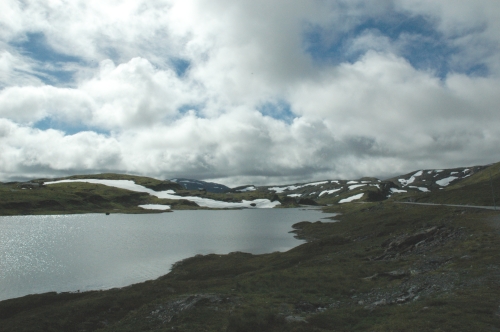 At the top of the fjord, the trees disappear and the landscape turns to rugged moss and rocks. The temperature drops to about 6C and for a while it’s only us and the frisky sheep. We stop and take time to breathe in the air.

I look around and note a scattering of small bright red coloured farm houses and quietly hope that we can find a guest house for next time. 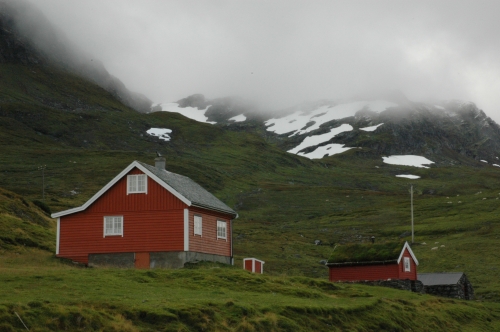 Oh, to spend a weekend on top of a fjord in almost solitude rambling along the rocks with only the sheep.
I quickly sketched out a future long weekend.
We learned early in our travels that even though we adore living in big cities, we do have a thing for vacationing in remote desolate places. Iceland, Atiu, and now this place, Vikafjellet.

With an early evening flight to catch, we tore ourselves away and zipped down into the valley on the other side and after a few hours (and many more winding roads) later we reached Bergen.

It may not have been sunny skies and beachy weather, but a weekend in the Norwegian wilderness seemed to satisfy our August Bank Holiday needs.
But perhaps I’m not entirely fulfilled.
After 3 days I’m left pining for the fjords.