I started my day today with a fine bit of National Rail nonsense, care of First Capital Connect. I admit that I’m completely insane by living in London and commuting up to Cambridge every day and yesterday was a reminder of that.

King’s Cross. I’m not sure what kind of monkeys run this train station, but they have a wonderful policy of not telling you exactly what platform your train is on until the last possible minute. Sylvia often runs into this when she tries to meet me at the station – they don’t mention what track the arriving train is on until all of the passengers have alighted, walked home, fed the cats, watched three reruns of East Enders, and finished off the latest Harry Potter novel. This morning, however, was really the crowning acheivement of King’s Cross mis-management.

This morning I left at 9AM to make the 9:15 train. Plenty of time. After two failed attemps to get tickets from the machine the third time was a charm but I was getting a bit concerned – it’s was 9:12 and my train was leaving at 9:15. I rushed out of the ticket office and checked the big board – the 9:15 to Cambridge is departing on … they don’t know. 3 minutes to departure and they don’t show the track number. Of course, the train is still listed as “on time.” They don’t know where it is, but by golly it’s going to leave on time. It doesn’t take a genius to figure out that space and time are one and the same and you need both to specify a train departure.

A few moments later the board changes – platform 11.

Let me explain something to you about King’s Cross. It’s a pretty damned big station. There are 8 platforms in the main station. If you walk along to about the end of platform 8, turn left, walk outside, pass platform 9 3/4 … 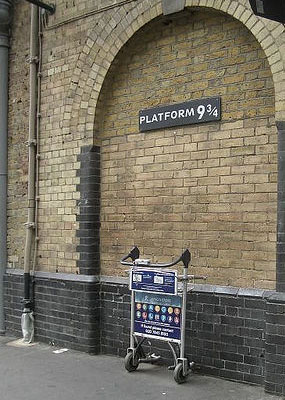 … you’ll eventually arrive at the annex trainshed, which, as you might infer by its name, is a really bloodly long ways away from big board in King’s Cross. In fact, it’s so close to St. Pancras that you’re practically in Paris. This is where the fine aging trains of First Capital Connect are often relegated. They’re like the Ryanair of train travel – sure they say you leave from King’s Cross, but you really leave from the annex trainshed half-way across London.

It was chaos. 2 minutes until the “on time” departure of the train and a wave of people start running towards the trainshed. There were men in nice suits who blew past a woman with a giant suitcase who was left to fend for herself by her travel companion. I was in trainers so I quickly made it near the front of the pack. And who was there to greet me at platform 11? One guy, yes, ONE guy, who was checking everybody’s tickets. Asolute and complete chaos. I flashed my ticket over the heads of some clueless tourists and made it on to the train. A few seconds later the doors closed leaving at least 90% of the passengers still on the platform. An employee of First Capital started waving his hands yelling “Don’t leave! Open the doors!” Absolute chaos.

But by this time I didn’t care as I was comfortably sitting in my seat – the only person in the car. I opened my bag, pulled out my noise cancelling headphones and breathed a sigh of release knowing that I managed to push just enough old ladies out of the way to make it on time. Sadly they did open the doors to let the poorly adapted passengers on and a short 15 minutes later we were on our way.

Thanks First Capital Connect! Remind me to work from home tomorrow.

2 thoughts on “This one goes to eleven”