So our first real bank holiday. Easter doesn’t count, that’s a Jesus day.
We managed to successfully avoid the rain that London had by flying down to Almeria Spain (more on RyanAir later). After a mad dash to Stansted airport (including a mental note to leave more time for tubing it to the train station) we arrived in Almeria just in time for dusk. We took a quick cab over to the coastal town of San Jose. This part of Spain seems obsessed with Italian restaurants but we were pleased to find that even the Italian joints have their Sangria done right.
We awoke to this view from our hotel terrace: 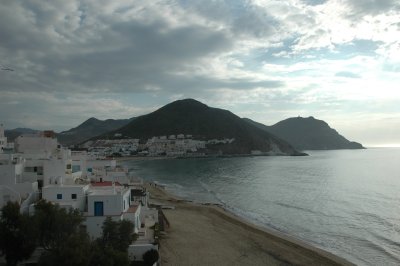 We spent most of Saturday playing with our new GPS unit as well as hiking over to Las Negras, about 21km away (and praising our addiction to gadgets since as it turned out the Lonely P’s route description turned out to be junk): 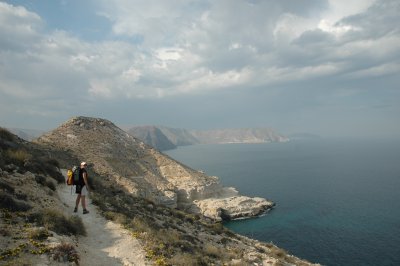 Views were excellent, the weather (aside from one random brief stint of rain) was perfect as well.

About 5 and a half hours later we pretty much collapsed in Las Negras, I think our office worker legs are out of practice! The great thing with getting out of the UK is that everything seems cheap. Beers for 2 Euro? A steal! And free Tapas!?? I love this country!
Las Negras itself took a while to grow on us. At first I found it rather dull, even though it’s quite scenic: 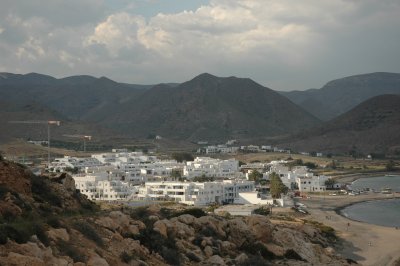 I suppose I have to keep in mind that this is not the high season, so I really shouldn’t expect a raging Ibizia nightlife. But seeing some of the tacky bits of the Coba Del Sol touristy area west of Almeria a few days later (we were East) gave excellent perspective on how this is the ‘real’ Spain (real but with Italian restaurants… and yet no Cappacinos?! These people need to stop telling me they can’t make cappuccinos when I see them using the frother feature on their giant state of the art coffee/espresso/cappuccino machine to warm up milk. What? you don’t know how to make foam?! I need to learn the Spanish for that!).

On Sunday we hiked our sore limbs over to San Pedro beach a little over an hour away. This ‘town’ is a bunch of ruins being squatted on by hyppies. There are some tents, some solar panels, a bunch of people with long beards and most of them naked. Nice location though: 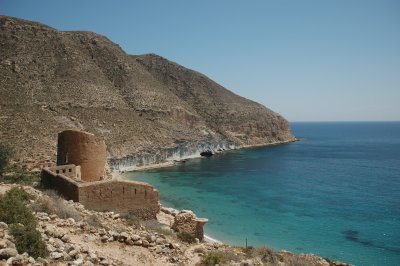 The bus back to Almeria for whatever silly reason runs only once a day. Every day at 7:30am!! So on Monday we arrived back in Almeria at 8:30am, and with plenty of time to kill, rented a car (learned to drive standard too!) and spent the day exploring nearby towns and the touristy coast west of Almeria.
Arriving back in London at 11pm that night we got to see first hand the bank holiday crowds, many tanned like us. And many looked as pleased with their holiday plans as we were.
Now if only RyanAir didn’t suck.
But more on that tomorrow.