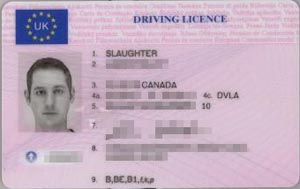 What do these have in common? Well nothing, except that the UK allows people with driverâ€™s licences from this haphazard list of countries to â€œtrade inâ€ for a UK licence. My Canadian licence was due to expire next month so I figured I might as well do the swap. By the way, I notice a disproportionate number of “island countries” in this list. I think there’s a pro-island bias in the UK.

But itâ€™s not all roses and kitten tails. I cheerfully ordered the relevant forms but when they arrived I found their dirty little racist secret:

What?! So youâ€™re telling me I go take a driverâ€™s test in Zimbabwe and Iâ€™m a-okay to putter around in a manual transmission but a Canadian canâ€™t hack it? Are they saying that the drivers of Barbados are more capable than I, a noble graduate of Ontario Truck Driving School (car lessons)? I feel so singled out, betrayed. I bet if I were born on an Island they wouldn’t have any issues with me. At least they printed it on 100% recycled paper.

3 thoughts on “Licence to … Drive”