Turns out a life of leisure is hard work! I need my rest!
I start my day around 10:30

By noon I’ve dragged myself out to Marylebone High Street for what was supposed to be breakfast but given the time, lunch.
Marylebone High Street by the way is one of my favourite high streets in London. The shops are a bit too poncey (Madonna does live in this neighbourhood after all) but aesthetically it’s quite pleasing. 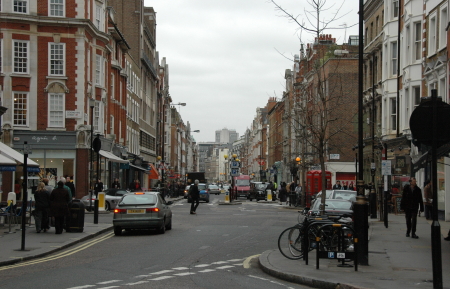 My plan for the afternoon is really just to go visit the National Portrait Gallery. But I strategically map out my walking route to hit up a few other stops. First stop the Timothy Taylor Gallery: 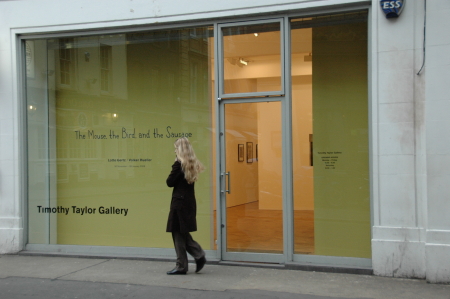 I’m not sure where the name of that exhibit comes from, there is no mouse, no bird and no sausage to be seen. Instead there are mixed media art works (mostly canvas with some splotches of paint with a few loose buttons and threads glued on).

Over in Soho I’m curious to see Carnaby Street and the near by Berwick Street Market: 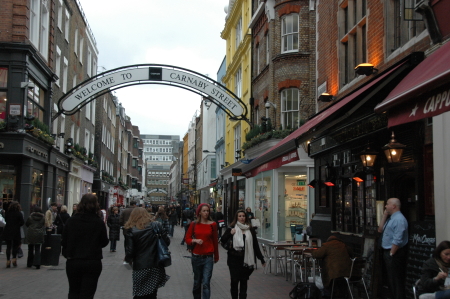 As for the market? Quite mangy. Maybe 7 stalls all selling limp looking produce. Yuck. As if this place made it into one of my guidebooks! But the street did take me past all the seedy parts of Soho Londoners talk about: 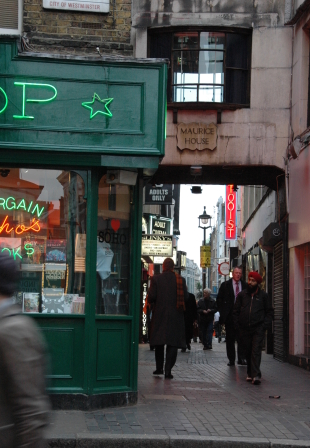 I’ll be honest. I’m pretty sure my craving for the portrait gallery came from watching an episode of The Colbert Report the night before where Steven manages to convince the American National Portrait Gallery to hang up his portrait (above a water fountain beside the toilets). Regardless of my motives, this was a great gallery. Although there sure are a lot of British people hanging up in that gallery that I have no clue about! The Beatles, Margaret Thatcher, Winston Churchill, and Richard Branson? No problem. But some BBC news presenter from the 1960’s? Um, no.

A few hours later I cut through the Convent Garden Market, stopped at a tea shop and then followed the signs to the British Museum. 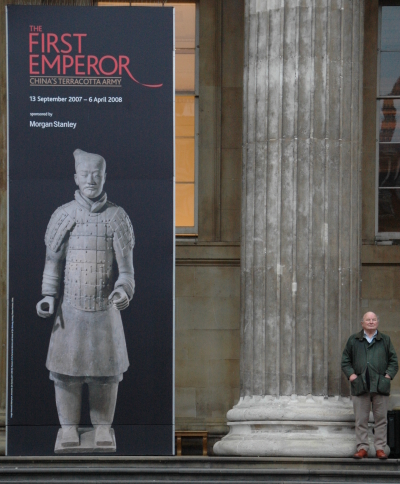 Having never been to the British Museum I was completely blown away! Seriously, this is THE museum to visit in London. I actually came in only to scope out the ticket situation for the Terracotta Warriors exhibit which has been sold out for months. I want to line up Monday morning for the small batch of same day tickets that are released each day, so this visit was purely reconnaissance. It was supposed to be a 5 minute stop on my way home to figure out where to line up and how many old people will I need to elbow, but out of the corner of my eye I spotted the Egyptian room…

An hour and a half later I headed home and then out again for drinks with Kerwin (I left Jason at home to enjoy his eye infection and probably a birthday party for Mips). Kerwin came to Kings Cross to meet me so I took him to Camino, a very cool wine bar in a converted brick warehouse that makes you think Kings Cross isn’t that bad.
I think i fooled him.