I heard on the BBC morning news that it’s Red Nose Day.
Still not sure what this ‘semi-holiday’ is all about.
I’m going to Goodge Street Station shortly to pick up a few things at a shop called Habitat. Hopefully I’ll see something on the street.

I’m back from my errands.. seems Red Nose day is out with some amount of force. I saw a guy in the street with a red nose on while handing out free papers (see picture) also saw a few ads on the taxi’s, 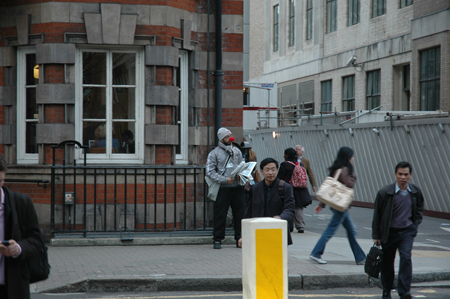 Since it’s after 8pm now, I’m watching the Big One on BBC One now. Interesting! I wish I understood more of the jokes though, I don’t seem to find it as funny as the live audience.
Hmm, this a bit like a nation wide shine-o-rama. only with much better execution.
And, apparently it’s only once every 2 years.

ps. I can’t believe how much swearing is allowed on tv!! They sure say ‘fucking’ alot on the BBC!