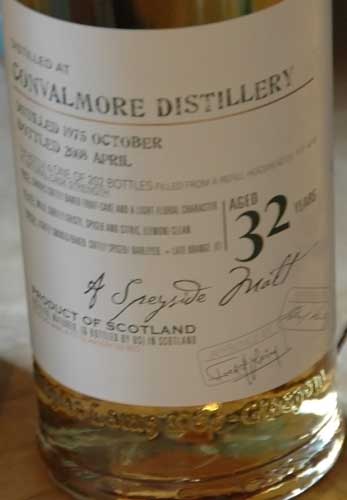 I celebrated my 32nd birthday with my 5-year standing tradition: drink a glass of Scotch that was aged longer than I’ve been alive. This sounded like a very good idea when I was 27, but it gets surprisingly expensive as I get older. I was impressed that I was able to find a 30-year old Scotch in Los Angeles airport on my 30th birthday, even if it was US$250. Fortunately this is one thing that’s become cheaper since I moved to the UK.

Sylvia and I were planning to go away this weekend to celebrate my birthday but that’s been pre-empted by a 2-week business trip to California. We’re still thinking of getting to Scotland however; hopefully we’ll be able to make our planned trip to Inverness the last weekend in October. So, unlikely my 29th birthday, I wasn’t going to have the luxury of purchasing my Scotch in Scotland.

So, I picked up a bottle at local Whiskey shop in London. This year I chose a 32-year old Speyside from Convalmore Distillery; admittedly, a distillery I had never heard of. As it turns out, Convalmore closed in 1985, with this particular Scotch being distilled in 1975 (one of 202 bottles from cask #4246). This bottle was a great purchase as it turned out to be a nice, smooth Scotch with a slightly smokey aftertaste. It reminds me of my daily cups of Taiwanese Lapsang Suchong. An excellent topper to my 32nd.