I’ll start by saying I don’t know if my co-workers are trying to pull a fast one on me… but apparently we saw the Queen was flying around in her helicopter today. Even as I repeat it, it sounds silly. But since I work within blocks of Buckingham Palace, it seems conceivable, and these very same co-workers did point out through the window Buckingham Palace, which is is plain view (and so his her majesty’s bedroom!). I suppose it’s plausible, but I can’t help but feel they’re trying to fool the dumb Canuck. God I’m such a sceptic!

Ok! Maybe it was the royal chopper! This is the helicopter I saw: 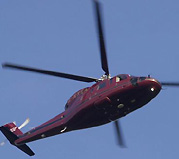 Does this count as a Royal sighting? I’m going to say yes.