I was once in the coffee room of my old employer when I saw a co-worker getting a Diet Coke out of the pop machine (as people so often do). We began to have some idle chit-chat and I asked her how she could possibly drink the nauseating swill she was currently enjoying (a common subject of conversation). Not just because it’s Coke, I said, but also because it is sweetened with aspartame which tastes more like a nasty chemical concoction (think Matt Crane) than sugar. She commented that she can’t tell the difference between aspartame and sugar, at which point I told her what I though about her mother and we’ve never spoken since.

Since that day I have asked various strangers at bus stops, cafÃ©s, and barber shops about their take on sweeteners. To my surprise, many people say they can’t tell the difference between sweeteners and sugar. Could it be that these people never pay close attention and don’t really care? Possibly. But many of these people are the same people who claim they can tell the difference between Coke and Pepsi; “Pepsi is sweeter” they often claim. I have come to realize the truth: that I possess a super-human sense of taste that allows me to pick out unique flavour combinations inaccessible to the average person. It’s how I can taste an olive hidden in a 12″ submarine sandwich and wretch appropriately. I can spot umami a mile away upwind. And I can tell the difference between aspartame and sugar.

To test this hypothesis, I secretly obtained samples of 3 major sweetener brands by concealing them in my shirt pocket as I exited a restaurant. Fortuitously, the hotel was kind enough to leave a pile of paper cups in the lobby with absolutely no security supervision. Here are the results of this covert operation: 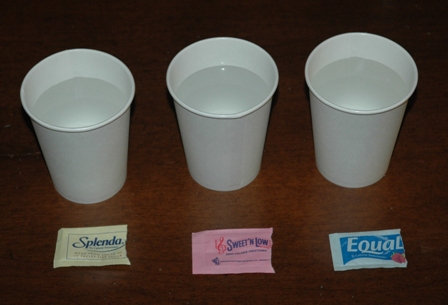 Equal (Aspartame)
This sweetener is produced by The Merisant Company of Chicago, the same company that owns Nutrasweet. Equal has been on the scene for a long time and was the first apartame-based sweetener sold to the public in the early 1980s. It’s cheif ingredient aspartame is best known for giving me splitting headaches.

Splenda (Sucralose)
Despite being a newcomer to the party, having been introduced only in 1999, Splenda is the current leader in the artificial sweetnener market with over 60% market share. Splenda’s parent company lies to the public with its “It’s made from sugar so it tastes like sugar” message and their other businesses include eating babies and converting owls to gasoline.

Naturally to run a proper experiment a control cup needed to be included. My hotel room was stocked with two sugar packets which were added to the line-up to serve this purpose:

I also used a cup of clean water to cleanse my pallet between trials. It’s not in the picture but it looks kinda like the other cups of water shown above.

After tasting each cup I can authoritatively say that unless you’re an idiot there is absolutely a huge perceptible difference between each of these options. Here are the results of my testing:

After clearly identifying the differences in the various options I decided to test my mad skills. Each cup was labelled on the bottom: 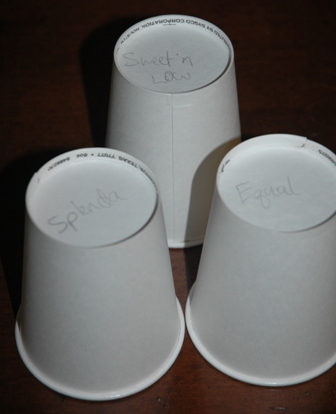 After a bit of shell-game swapping, I had the following randomized cups:

At this time I was going to run a long list of randomized trials and record my guessing, tabulate my results, run statistical analysis, and record my findings in the next issue of Nature. Unfortunately I ran into a few roadblocks that prevented me from continuing:

The results? Sugar still tastes the best with its sweet subtle taste. If you have to go with a sweetener it’s Splenda by a wide margin. And if you’re ever tasting a diet drink and have a nasty chemical feeling in your mouth you know you’ve had aspartame or saccharine. If it’s a disgusting overload of sweetness that drops off quickly it was probably saccharine, but if it sticks around for a while and gives you that fresh chemical feeling with a headache boot you’re the lucky consumer of aspartame.

In closing, I have no regrets about what I said about my co-worker’s mother.

7 thoughts on “The Great Sweetner-off”