Some sort of bizarre eye infection proves what happens in Vegas clearly doesn’t stay in Vegas. So Day 2 starts with taking Jason to the chemist (= pharmacy in Canadian) for some eye rinse. For this errand, my services were needed essentially as a seeing eye dog. Without contacts Jason’s peripheral vision is quite limited and in a city where bus drivers speed up at the sight of pedestrians, it’s best that I’m there for road crossings. I got breakfast out of it though and proof that on a Monday morning it’s really just old people out at restaurants: 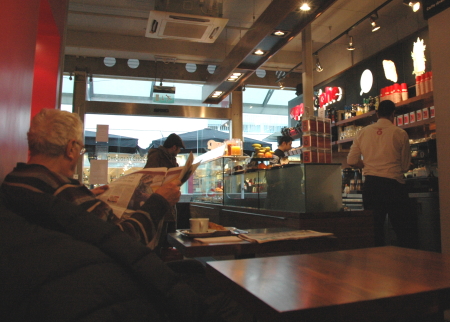 A bit later I was at Westminster’s equivalent of the YMCA for a swim. Seems 11am is the prime time for school kids using the pool (I’m guessing it’s schools that don’t have their own on-site pools?) and mom and tots having lessons. This all translated into a fairly empty lane of swimming my laps, but a change room that sounded like Romper Room and smelled like a Diaper Genie.

Next it was lunch in The City with Kaila and Heather: 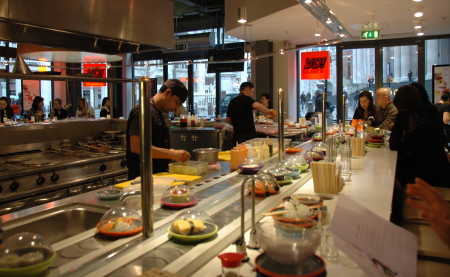 With my lunch dates heading back to work, I headed across the Millennium Bridge and went to the Tate Modern. I’m a day late to see The Louise Bourgeois exhibit, it closed yesterday. But having seen her Maman sculpture (the giant spider) in Ottawa last year I was more amused to watch it being disassembled by cranes: 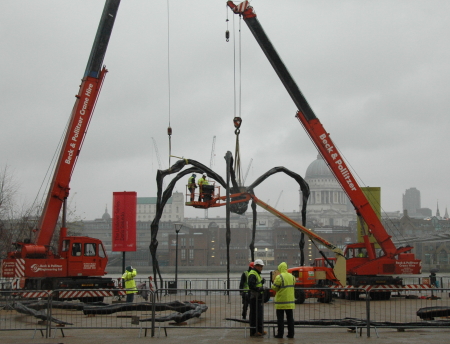 Inside the main event is Doris Salcedo’s Shibboleth, better known to London as “the crack”. 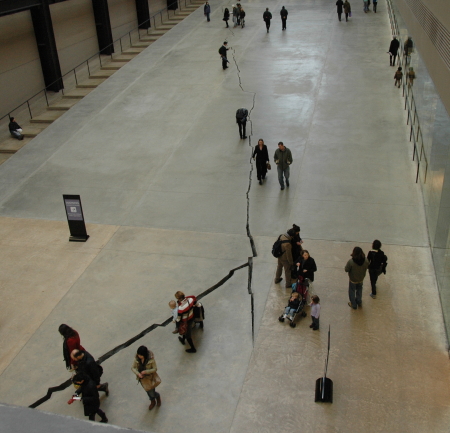 I’ll spare you the discussion on it’s representation of racial separation (read about it on wikipedia if you’re curious).

After crawling around the floor myself and making my own conclusions I spent the next while watching other people. After it initially opened enough people fell into the crack that it hit the press, and they now have warning signs. So I was curious to see what other people do: 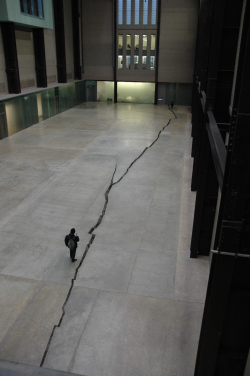 … but people also like to get in and get a close up look: 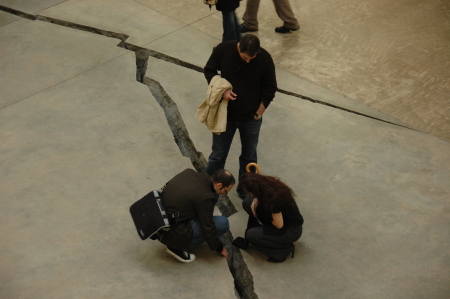 .. and many do the straddle walk, although one lad in this trio decided to take a call as well: 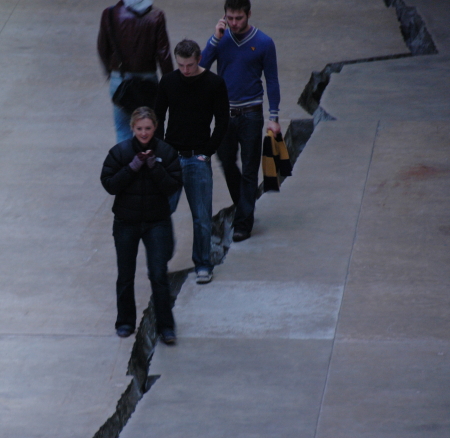 Overall, symbolism or not, it’s quite interesting. As for the rest of the Tate Modern the exhibits are quite good. The museum itself is surprisingly small given it’s a converted power plant.

I next made my way back to Belgravia to pick up 3 batik prints that we had framed. We bought these in Malaysia and of course spent exponentially more money getting them pressed and framed than on the actual print. Hulling the 3 large frames back home on the tube, I contemplate the strange things I’ve transported on the tube. Just last week I went up to zone 3 to buy a new vacuum cleaner and carted that giant box home. I’m sure the tube staff have seen all sorts of weird things.

Back up at Kings Cross Jason and I went to register ourselves at our local NHS doctors office (which the Brits like to call a surgery even though no operations take place, silly, silly) Yes, this is something we should have done when we first arrived but until this eye infection we haven’t really had a reason.
They gave us some forms and a little pee cup to bring back – filled – when we have our new patient exam in a few days. I’m going to assume (and hope) that the pee cup isn’t just a Kings Cross thing.