I found myself esurient today so I sallied forth and infiltrated the local corner shop in search of some confectionary to easy the hunger pangs. I came across a display that I had seen a few times since coming to the UK: that of a British chocolate bar called “Yorkie” with a rather stupid tagline of “It’s not for girls!” 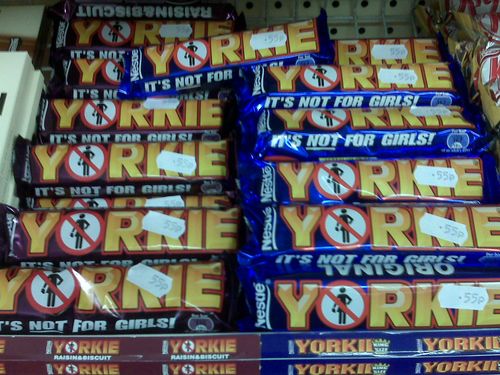 For those who know me, they know I tend to be attracted to stupid local foods and drinks, which is why I have Pocari Sweat powder at my desk at work and used to stock my bar with BrennivÃ­n. So of course I coudln’t resist the attraction of trying a new local product with a stereotypically British name of “Yorkie” for only 55p.

The Yorkie in all its glory

Next to the “It’s not for girls!” tagline I also noticed that it contains 18% of an adult’s GDA of Calories. Good thing I skipped breakfast this morning, otherwise I’d feel like I’m being unhealthy.

But before consumption, I just had to know the back story – why is Yorkie just for guys? Is it full of beer and foodball? Does it scratch its privates in public? Is it afraid of commitment? The NestlÃ© Yorkie site has this to say:

The ‘Not For Girls’ campaign theme for Yorkie uses humour, which resonates with todayâ€™s British male and simply states that Yorkie is positioning itself as a chocolate bar for men who need a satisfying hunger buster. With five solid chunks of chocolate, itâ€™s a man sized eat!

After being suitably educated, I cracked open the Yorkie: 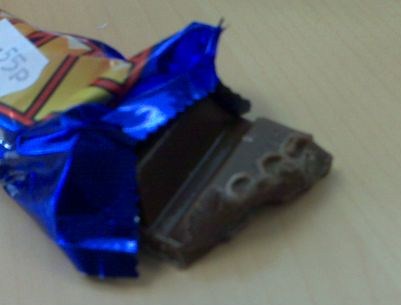 So how is it? Well, like many local foods that haven’t cracked the larger market, it kinda sucks. It’s just cheap milk chocolate in a chunky bar. Somehow I doubt that today’s British men are resonating at the idea of cheap milk chocolate in bar form. Furthermore, it did not “bust my hunger” as NestlÃ© claims, as I still needed a proper lunch only a half hour later. But perhaps I’m just not man enough for a Yorkie: while I often enjoy sitting on the couch and drinking beer, I’m not watching football when I do it.

In the end I think I discovered why Yorkie is “not for girls!” Most women aren’t stupid enough to waste 55p on bad quality milk chocolate. Blech. I would ask NestlÃ© for my 55p back but I know I would just blow it on their “Raisin & Biscuit” Yorkie.