I got to Cambridge this morning (after landing into Heathrow at 6:30AM) only to find that yet again some idiot had locked his bicycle to mine. Unlike the first time this happened this guy had locked right around my inner frame so there was no way I was going to be able to get free.

I figured if I couldn’t get my bike free, the only other option would be to try to open the lock. Here’s what it looked like: 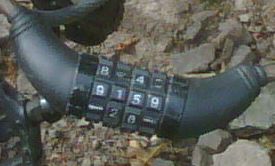 It looked pretty straightforward – four numbers on a dial. I figured there were probably “teeth” inside and the correct numbers would have a gap under them that allowed the teeth through. I was reminded of 1996 when I read the (in)famous MIT Guide To Lock Picking while procrastinating at University. Could this lock really be that simple? Surely it had to be more complicated than this?

So I gave the following a try:

The above took me less than 20 seconds, and I’ve never picked a lock in my life. Here’s the end result: 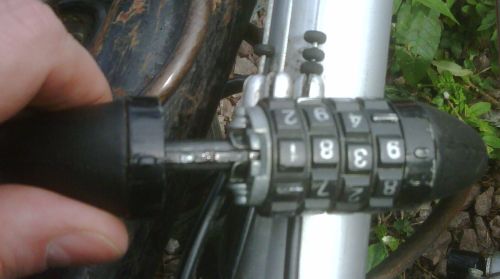 My bike was free! The whole ordeal, from noticing my bike was locked and including cursing, looking for a way to unravel it, kicking the guy’s tyres, texting Sylvia to bitch about it, figuring out the lock was probably easy to pick, and picking the lock was about 3 minutes in total. It’s not surprising that so many bikes get stolen at Cambridge Station.

And to the guy who’s lock this was: