We had set an alarm so that we’d wake up and get to see Irktusk – the most famous and touristed stop along the whole siberian express. at 5:30am there was not much going on. A huge station, a very pretty terminal, but we were unfortunately 4 platforms away from the terminal and couldn’t even go have a look. Nothing was being sold, it was a very quiet town. Disappointing, I expected a lot more. 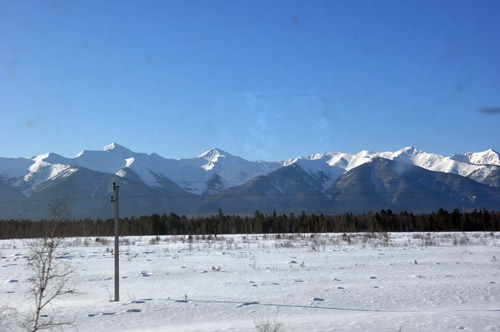 We decided to have a quick nap, it would be another 70km before we reached lake Baikal, but it turns out we overslept and missed the first 50km of the 200km lake side stretch. I can imagine in summer this lake would be gorgeous to look at. But at this time or year, completely frozen over, it had a much different concept of beauty. it’s hard to get a sense of how big it is, when you just see white blending into white. 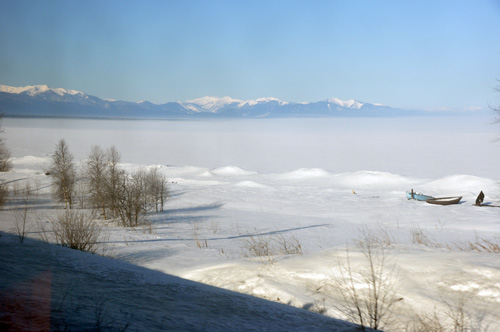 (this one with a person walking on it) 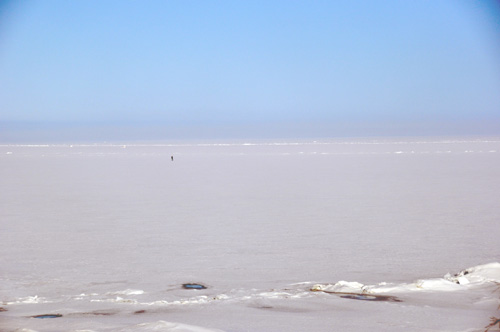 By mid afternoon we stopped at Ullan-Ude. This station was quite busy, and had a surprising collection of high rises in a 1970;s Las Vegas style. Here we picked up some more bread, sausage (which turned out to be incredibly greasy), 2 boxes of juice and some water. We’d hoped to pick up more but the selection from the ladies was limited. While we were stopped a Russain commuter train pulled up beside us and unloaded over a hundred passengers – this station actually had some life! 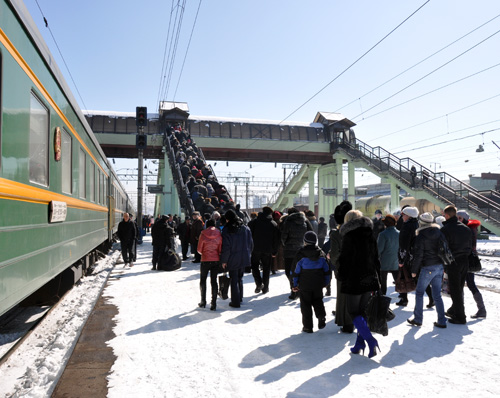 What was also nice was for the first time, passengers actually joined our train! Our cabin has a new person, a Mongolian lady in the most pimped out fur coat.

Back on our way, our Trans Mongolian train took a sharp turn south finally shaking the shadow of train 2 the Rossiya – the more popular trans siberian express. As soon as we headed south the scenery instantly changed. trees disappeared, livestock appeared, even the snow faded away to reveal brown harsh hilly landscape. Exactly what i expected Siberia and Mongolia to look like. 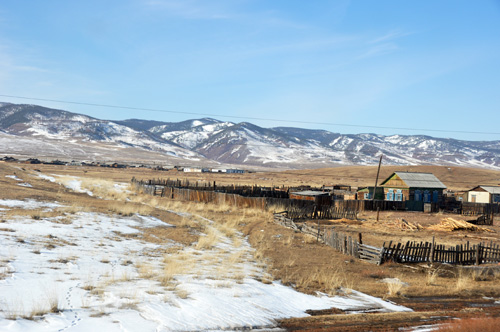 It was a slow journey to the border, giving Jason and I plenty of time to nap.

The Russian border was a spectacle in extreme slowness. First round of officials came to take our passports. An hour or so later they came back with them, freshly stamped. Another hour passed and they came to get our customs declaration forms. 30 minutes later officials with dogs came through. 30 minutes after that they came to search our cabins, including the ceiling panels! And this was all ahead of schedule! Couldn’t imagine what it would be like during high season with a full train.

Next up the Mongolian side of border control. Passports were immediately collected. After an hour the train jerked a bit and then we reversed – passports still no where to be seen. After 10 minutes we stopped for a few minutes, then moved ahead for another 2 or 3 minutes. Stopped, and reversed. This back and forth lasted about half an hour, until we finally returned back to our original place at the platform allowing us to stare out the window at the closed up duty free shops. Finally, passports were returned, and then customs check came on board and searched the cabins. After that, it was just a sit and wait for them to decide that they’ve inspected under the train sufficiently, which took about another hour. But finally, we pulled away. Compared to what we’d read on the internet, this was an amazingly speedy crossing. We’d read about horror stories of 11 hour crossings.

Interesting day, tomorrow we will wake up in Ulaan Baatar – the capital, where hopefully we can change some money.