I can’t go on enough about how good the weather is here! ( I guess that just makes me so Canadian to constantly mention the weather) But 25C and blue skies in April!? How can I not?

Today we took a day trip out to Leeds Castle, which is not actually in Leeds but rather in completely the opposite direction of Leeds, in Bearsted. This weekend I’ve learned that the British manage to make something as simple as rail tickets incredibly complicated! We finally smartened up and bought a one year Rail Card today so that we could cash in some major discounts.
Here’s what I don’t get. Why is the round trip price to Bearstead Â£14.50, but Â£9.50 if you have this magical Rail Card? The Rail Card only costs Â£20 to begin with… Â£20 for both of us. So by getting that card, Jason and I saved Â£5 each, total of Â£10 saved. Now if we go on one other rail trip wouldn’t the savings have paid for the card?? Just 2 train trips and the card has paid or itself. But here’s a question?! Why bother with the card in the first place? Why have a card that pays for itself in only TWO TRIPS?!!? Why wouldn’t everyone get it? Isn’t is conceivable that pretty much every person who takes the train once outside of London will likely take the train again sometime that year? Why bother with the fuss, administration and annoyance of a Rail Card? Is this to scam tourists who don’t know about the Rail Card? That’s retarded. Why make it so complicated?!
I’m learning there’s a reason the Brits call everything a “scheme” (i.e pension scheme, pet travel scheme, rail card scheme..)

Sorting out tickets to the actual castle was silly too. You can either buy your train ticket, bus ticket (short bus from train to castle) and castle entrance fee separately… or if you do the research you’ll learn that there is a complicated scheme to buy package prices in London before you leave and another combination if you arrive at the train station and need to take the bus to the castle. I just find it to be such a bother. Don’t have 3 different price possibilities for a 10 minute bus ride from the train station to the castle. Just charge one price and take me to the damn Castle!

At least the castle was nice, and a perfect day to visit it. 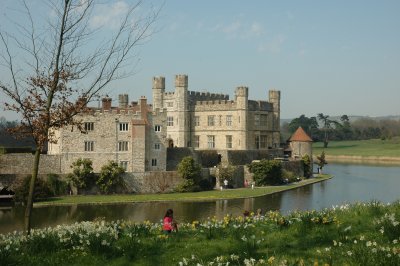 The grounds were huge, and crawling with families. The maze was quite interesting since at one point it lead into an underground grotto. The interior of the castle was a collection of old stuff that I find marginally amusing. But what was truly bizarre was the tiny Museum of Dog Collars: 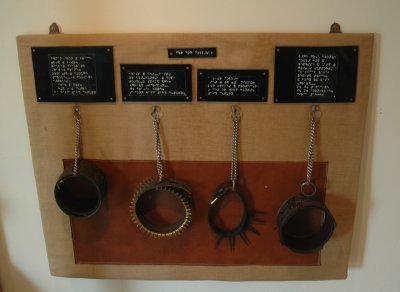 And of course, in the grand tradition of our weekends, we took a nap on the lawn: 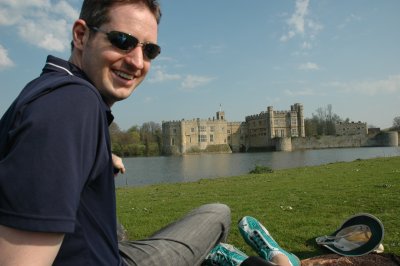