We’ve been back for a week, but I’ve been a bit distracted with this pesky CFA exam. For the record, I felt like there were less people in London writing it, than in Toronto, which surprises me given the amount of financial geeks there are in London. The procters are far more polite in London too. In Toronto they were quite militant. But, like Toronto, London’s CFA exam day was quite the sausage party. Thankfully, the convention centre was air conditioned. This is a legitimate concern in London!

But, back to the Swiss. For our 2nd May bank holiday (why are there are two bank holidays in May, I’ll never know, but I would like to smack the government worker who came to this decision up side the head! Could you not push out until like October, when we could use a day off to perhaps enjoy some turkey and pumpkin pie?! ) we decided to go to Switzerland. The long weekend was immediately after my birthday and I chose Switzerland because I’m slightly obsessed with this country since my visit almost 5 years ago, and have been dreaming about going back ever since! Thankfully, Switzerland did not disappoint.
I’m not sure what it is about this country that has me so infatuated. Perhaps I can chalk it up to the crisp mountain air that makes me think crazy thoughts like buying a cute little swiss mountain cottage and retiring to the alps. (i’ve been working for 5 years, surly it’s time to retire…)

On Friday we grabbed an evening flight to Basel from London’s Luton Airport. Luton, had the joy of experiencing a computer glitch that shut down their check in systems right around the time that oh… about 14 different Easy Jet flight passengers are trying to check in! Pure chaos. Of course, that just made us appreciate the Swiss infrastructure efficiency even more. It truly is wonderful. Never have I seen such punctual trains. They’re on time to the bloody minute!

On Saturday morning we took a train to Altdorf and rather than switching to a local bus, walked the 5km to Attinghausen, the start of the long hike. Not much to report about this town, it has 2 hotels, 3 restaurants and 1 grocery store. Clearly, it was a pretty happening place to be on Saturday night. At least it’s quaint.

Early Sunday morning we packed up are things and headed off. Knowing full well that we were in for a long hike (estimated at about 7.5 hours) we decided to spare some early pain and take the well placed cable car up to Brusti: 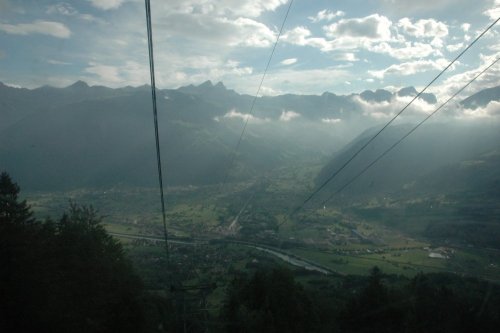 The weather looked promising. Given the forecast of heavy rain, we were a bit concerned. We actually had wanted to sleep the night in Brusti as the Lonely P. hike suggests, but a few weeks earlier while making our hotel bookings we learned that when the Swiss say that the hiking season starts in June, they mean it. If you show up on May 26th a mere few days before June you’ll find most guest houses closed for “holidays”. There’s that punctuality again.
Fine. No matter, our sleeping arrangements down in Attinghausen worked out well.
So off we go on our hike:

I will admit, hiking in late May which we now know is the off season, brings you some lovely solitude. For over 3 hours we hiked alone, just us and the cows … and their nosy bells (which are huge! but the sound is actually soothing, at least to me. I don’t know how the cows feel about giant heavy bells the size of toasters around their necks).

As we climbed higher we hit some snow which delighted us, snow in late May! How cute: 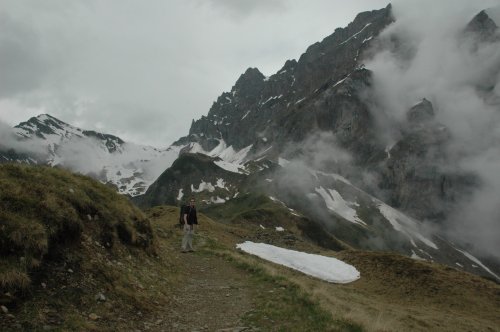 But a few hundred meters higher, the weather turned and the snow didn’t seem so cute anymore! 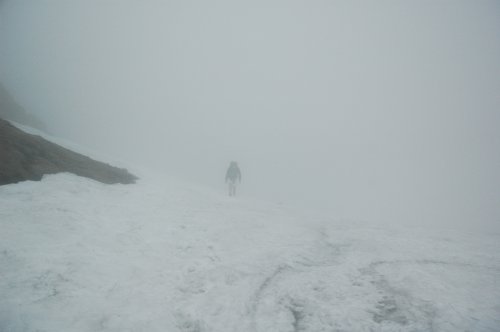 As visibility got worse, and with the normally frequent trail markers covered in snow we were VERY thankful to have GPS with us. Hiking season starts in June, INDEED!! For a good 45 minutes we were stuck on the side of the pass ankle deep in snow, without any visible trail markers!! About an hour later (along with some cursing and wishing for snow crampons) we managed to hit the top of the Surrenenpass, about 2300m altitude. Shockingly, on the other side of the pass the weather was glorious. The snow magically disappeared, the grass was visible, and there were actually a few hikers out and about on this side! Bizarre: 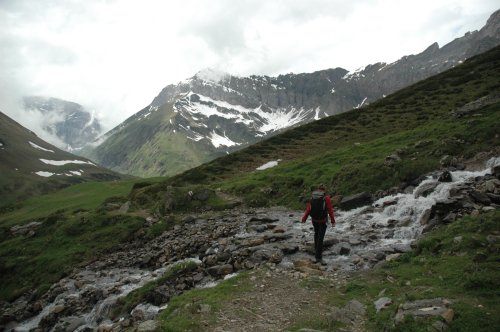 This was also the side of the pass where we stopped for a cheese break (see post below), before making our final decent down to Engelberg. We started at 8:20am. With time to take photos, get lost in the snow, eat some cheese, and take more photos, we cruised into sunny Engelberg just before 6pm. A far bit longer than we anticipated, and our feet screamed in agreement.

Reminiscent of Spain, we were asleep before sunset.

Monday morning I pulled open the curtains of our hotel room to find it was snowing outside! What happened to our sunny lovely spring weather the day before? 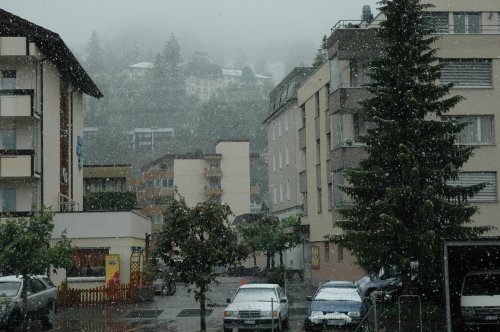 As the train to Luzern descended out of the mountains the snow quickly turned to rain. In retrospect, we had been quite lucky not to have this rain during our hike.

We made a lunch stop in Luzern (a very pretty Swiss town): 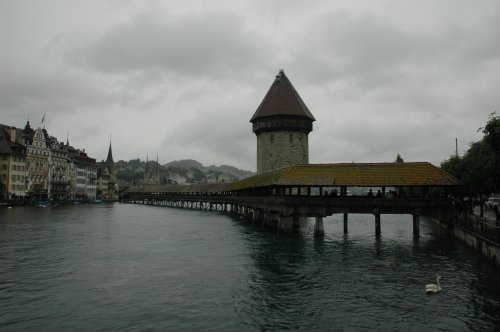 … before continuing on back to Basel.
It’s not all football hooligans in Basel, the core of the city is very pretty: 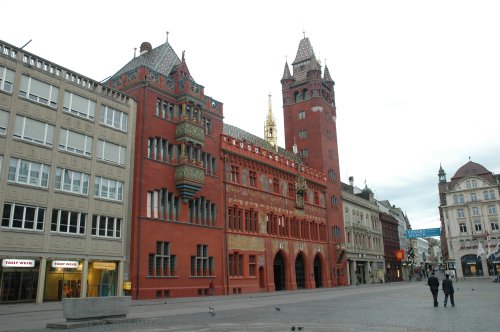 And with that, our 3 days in Switzerland were over.

And the dreams of when I will go back start again.

One thought on “The Swiss Review”